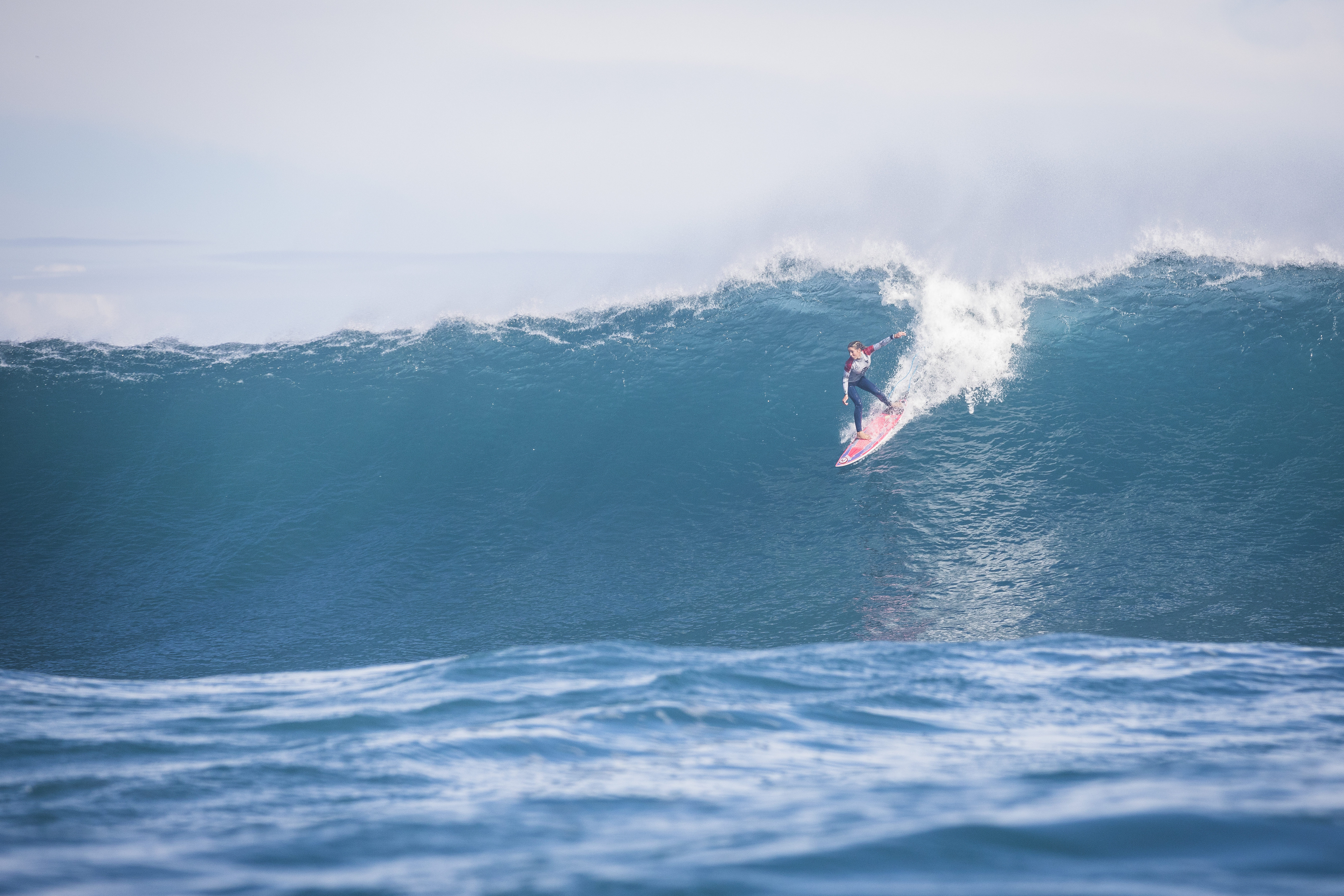 MARGARET RIVER, Western Australia, Australia (Monday, May 3, 2021) - The Boost Mobile Margaret River Pro pres. by Corona, the fourth stop on the 2021 World Surf League (WSL) Championship Tour (CT), continued in sizable conditions for the remaining two heats of the men’s Seeding Round, the men’s and women’s Elimination Rounds, and the men’s Round of 32. The day’s competition saw non-stop action with the overlapping format for the men’s Round of 32, and the field is now narrowed to the top 16 men and top 16 women.

CT veteran Jeremy Flores (FRA) put on one of his best performances in recent history to overcome CT rookie and local favorite, Jack Robinson (AUS), in what was arguably the heat of the season so far. The pair went blow-for-blow, both finding rare Main Break tube rides to post solid scores throughout the matchup with Robinson leading the charge and leaving Flores needing an excellent score to take the lead. Then, with only a couple of minutes left in the heat, the Frenchman found a bomb and laid two massive frontside hacks to post a near-perfect 9.40 (out of a possible 10) to claim victory over Robinson. 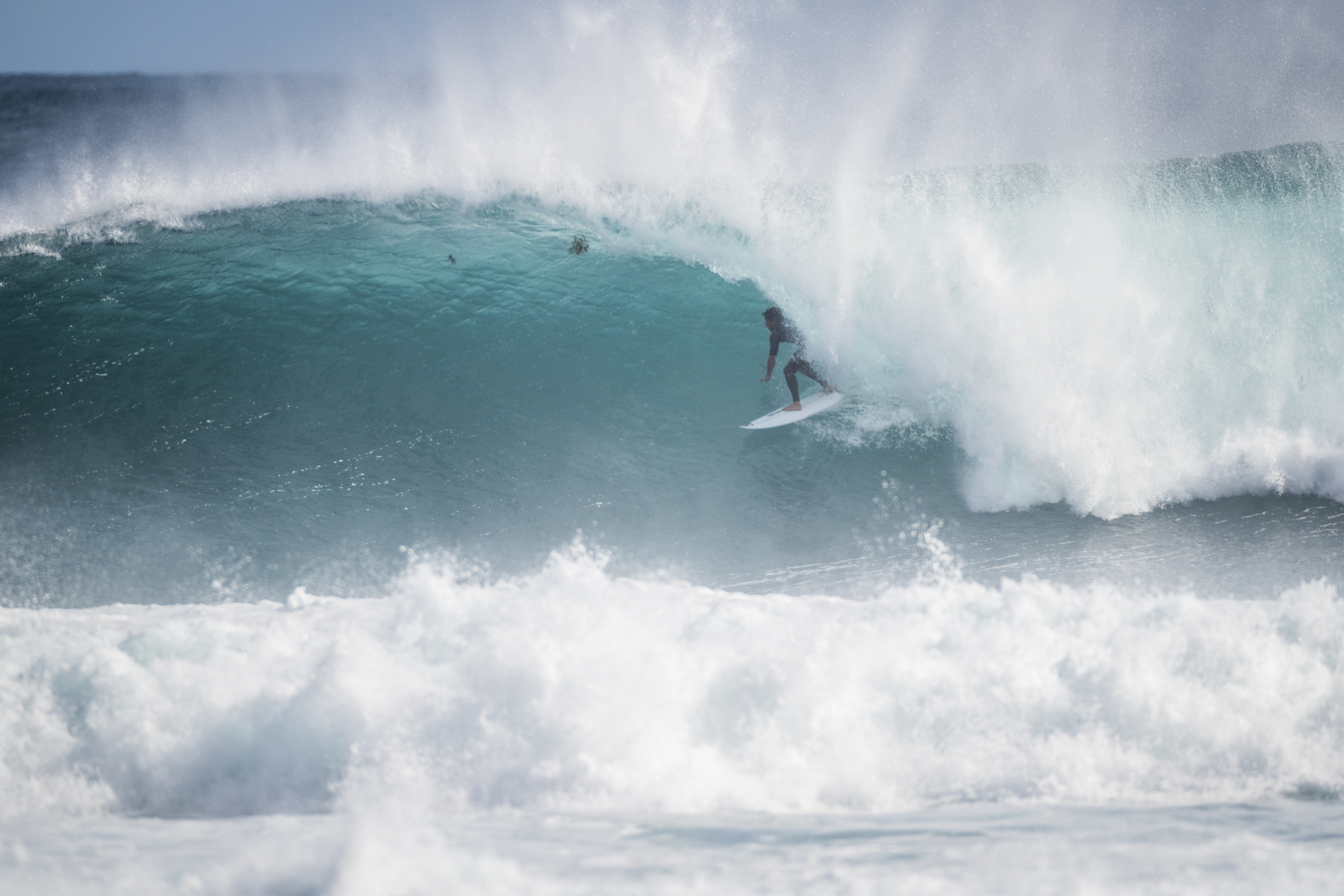 “After all of these years this is the sort of heat I’m always hoping for,” Flores said. “Coming up against the local boy, who rips in pumping surf, this is what we do this for. We are at opposite ends of our careers, his is starting and I’m coming towards the end. If we were in smaller waves I’d struggle to match it in the air but in waves like this, I know I can perform well. It feels good to know I can still match it with a young beast like Jack Robinson. I’m glad to have a heat with him before I end my career and I’m even more glad to win it.”

World Champions Gilmore, Florence, and Medina, Ferreira Advance to Round of 16

John John Florence (HAW), two-time WSL Champion and two-time event winner, continues to excel at Main Break with a win over Leonardo Fioravanti (ITA) in the Round of 32. Fioravanti opened the exchange with an excellent 8.67 (out of a possible 10) but failed to back up his first score against Florence’s 7.67 and 8.37 scores. Florence will now face Peterson Crisanto (BRA) in the Round of 16. 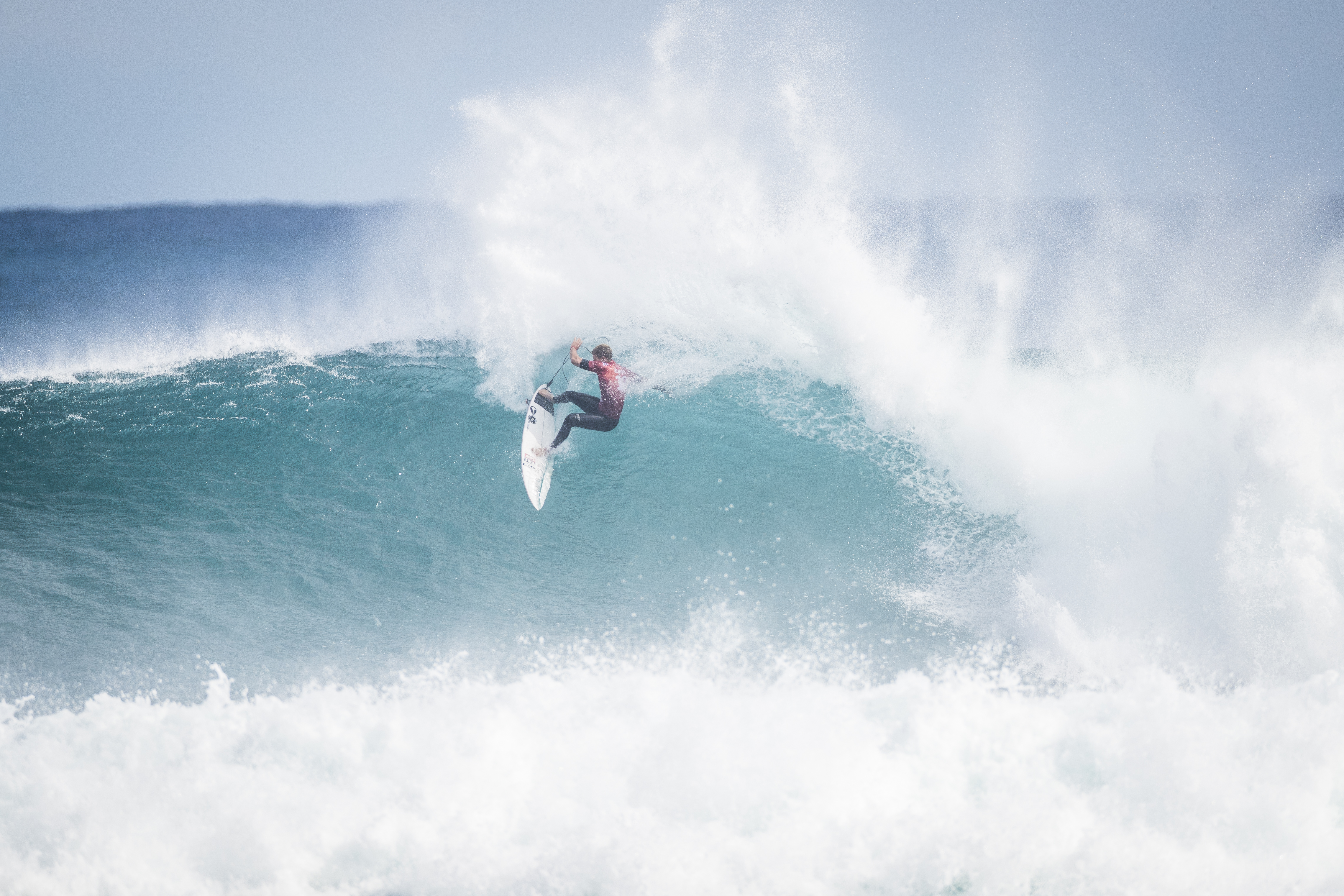 Crisanto eliminated Australian Olympic qualifier Owen Wright (AUS) in the second heat of the Round of 32 with a 14.76 combined score (out of a possible 20) to Wright’s 12.60.

Gabriel Medina (BRA), two-time WSL Champion and current World No. 1, shows no signs of slowing down and will advance to the Round of 16 after defeating Connor O’Leary (AUS) in Heat 9 of the Round of 32. Medina posted two seven-point rides for the win and will match up with Seth Moniz (HAW) next. Medina looks on track to equal or improve on his best result in WA after his performances so far. 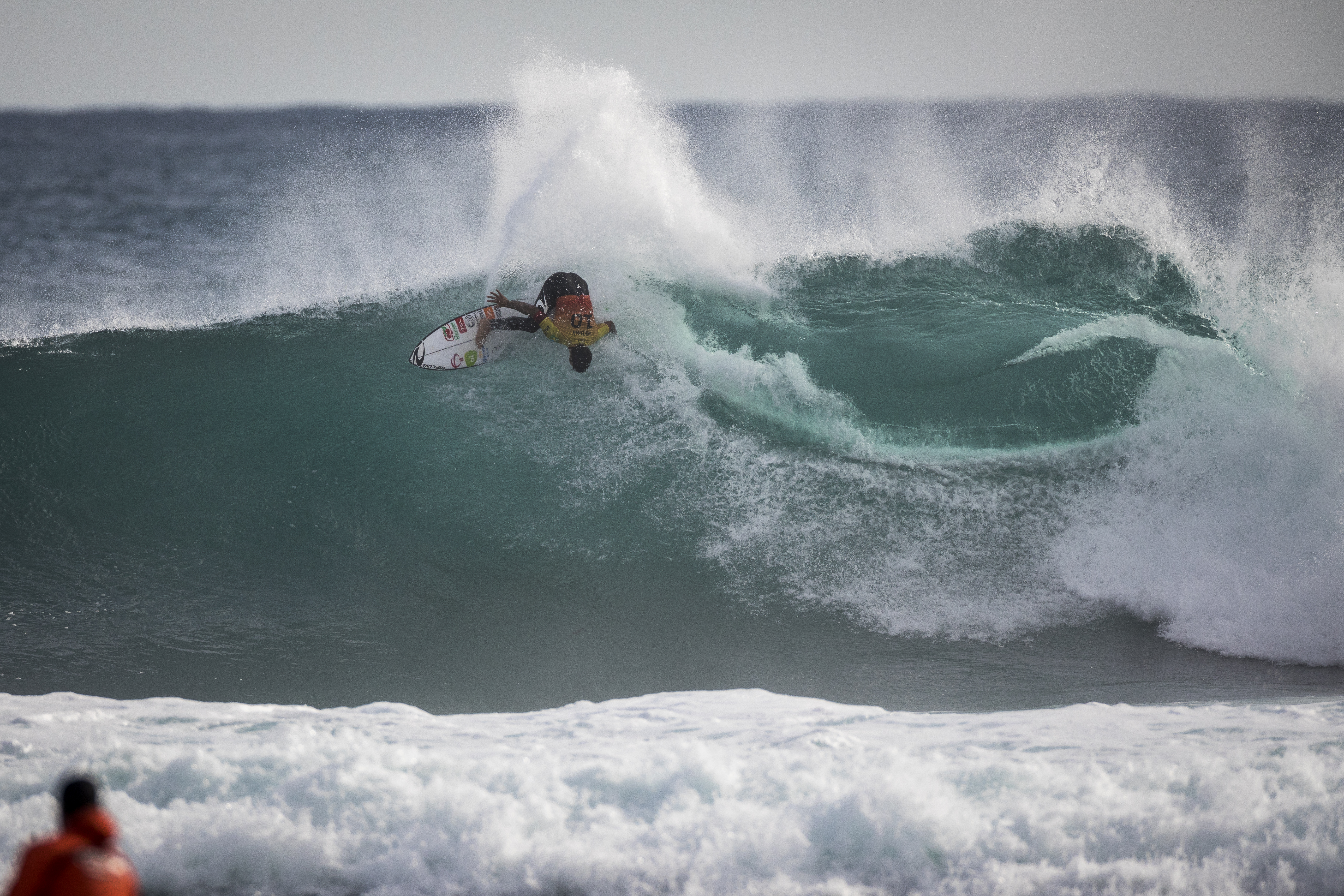 Italo Ferreira (BRA), current World No. 2, will move into the next round with a win over CT veteran Adrian Buchan (AUS) in Heat 13 of the R/32. Ferreira locked in big scores for a 15.57 two-wave total, but he will now need to pull a win over top-performer Caio Ibelli (BRA) in the next round. Ibelli earned the third highest heat total of the day, an incredible 17.04, against Michel Bourez (FRA). Ibelli’s performance was reminiscent of that at this location in 2019 when he finished in equal third place at Main Break. 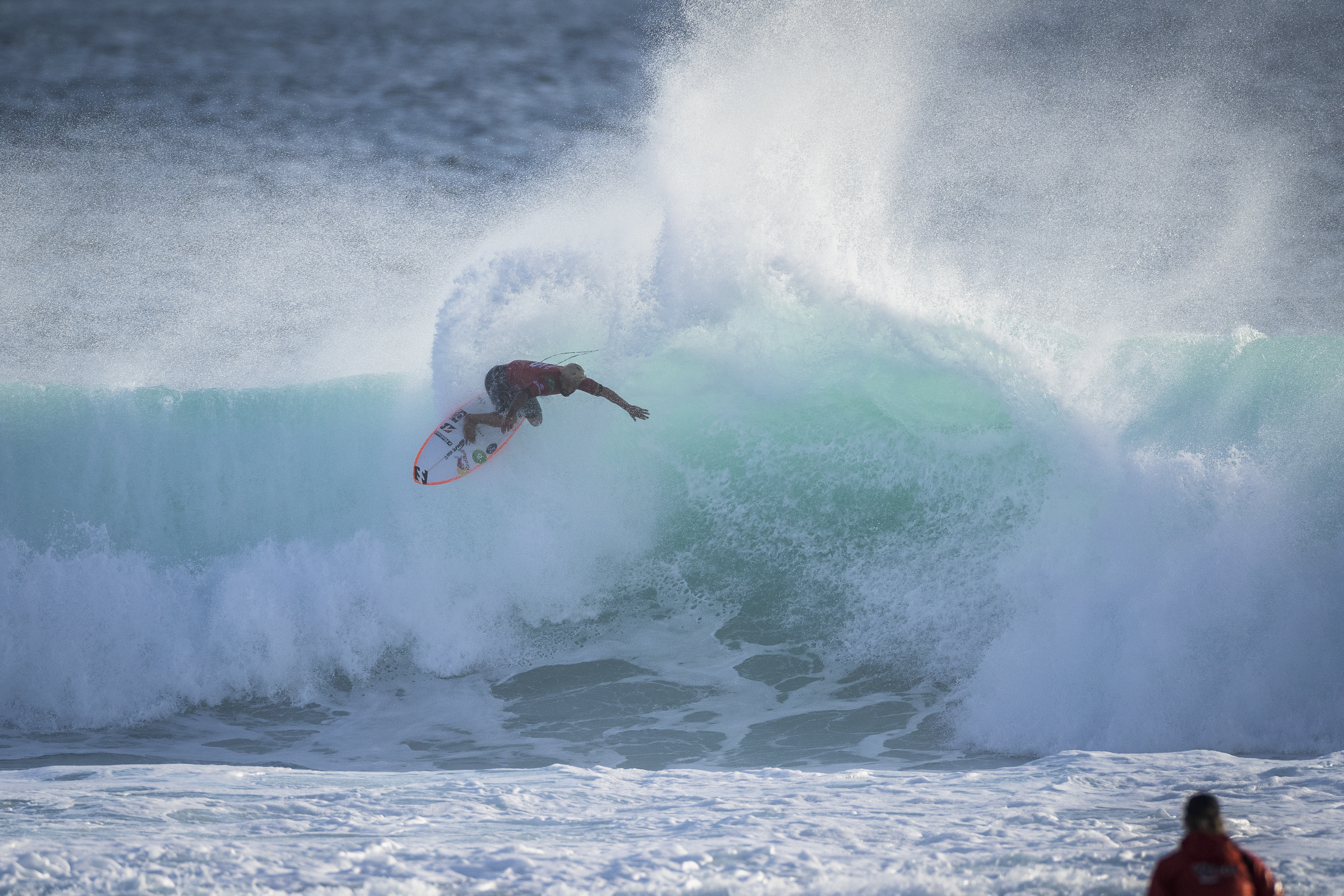 “I’m feeling a lot of nostalgia from 2019 at the moment,” Ibelli said. “Same board, same waves and same light. It all feels so good. Days like this are why we are professional surfers — when the waves are like this — I live for it. We want more events to be like this where you can be entertained all day and then surf pumping waves in our heats. It’s so much fun.”

2015 WSL Champion Adriano de Souza (BRA) did not make the cut in his heat against Frederico Morais (PRT). De Souza will exit Margaret River in 17th place, which is a surprising result as the former event winner in 2015. Last year, De Souza announced his retirement from full-time competition and the next event will mark his last lap in Australia before retiring at the end of the season.

Event wildcard Willow Hardy (AUS) was eliminated by seven-time WSL Champion Stephanie Gilmore (AUS) and Malia Manuel (HAW) in the first women’s Elimination Round. Despite the elimination, the 14-year old showcased major commitment in the waves of consequence in her first CT appearance and let the world know that she will be one to watch in the future.

“That was definitely one for the memories,” said Hardy. “I am never going to forget this day. I just love getting out there in the pumping waves and trying to send it. The girls were really encouraging and it was so nice to surf with the people I look up to most. Thank you to everyone for all the support, it has really been amazing.”

On the Men’s side of the draw, along with rookie Robinson, event wildcard Cyrus Cox (AUS) lost in the first elimination heat of the day to Conner Coffin (USA) and Alex Ribeiro (BRA), while Jacob Willcox (AUS) went down to an in-form Kanoa Igarashi (JPN) in the Round of 32.

Sage Erickson (USA) has been in the Elimination Round three times this season and needed to advance to avoid a second early elimination on the Australian leg. Erickson posted a strong ride on her opening wave, a 6.83 for the lead, and a 5.67 to hold control of the heat. Keely Andrew (AUS) was close behind with a 6.17 and 5.80, putting Courtney Conlogue (USA) under pressure. Despite earning a solid 7.27 and a 4.17, Conlogue missed the requirement on her last wave to advance to the Round of 16. 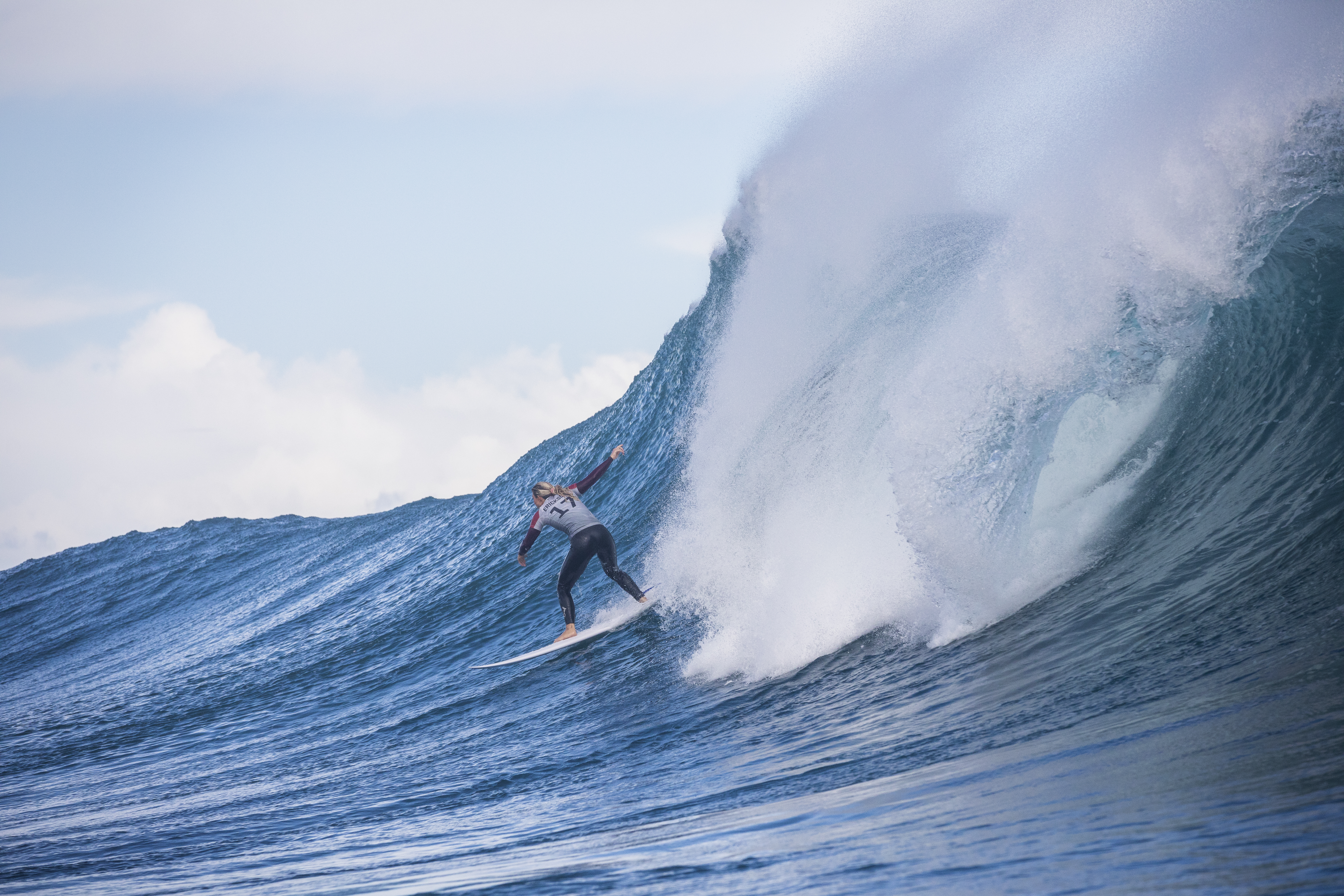 “I came down last night just to really get a grasp of how big it was and it was huge and the whole bay was closing out,” said Erickson. “But today I was nervous again when I saw that we were on. I had a chat with Jessi and Renato about what the forecast was looking like and what to expect, and they really want to elevate and push the women in bigger surf. Being a part of that generation, I can do my part. So today I was like I am going to have fun and Tom was like, ‘Just smile, you’re so happy and you’ll have a great time,’ so it’s good.”

The Boost Mobile Margaret River Pro pres. by Corona runs through May 12. The event will be broadcast LIVE on WorldSurfLeague.com and the free WSL app. Also, check local listings for coverage from the WSL's broadcast partners.