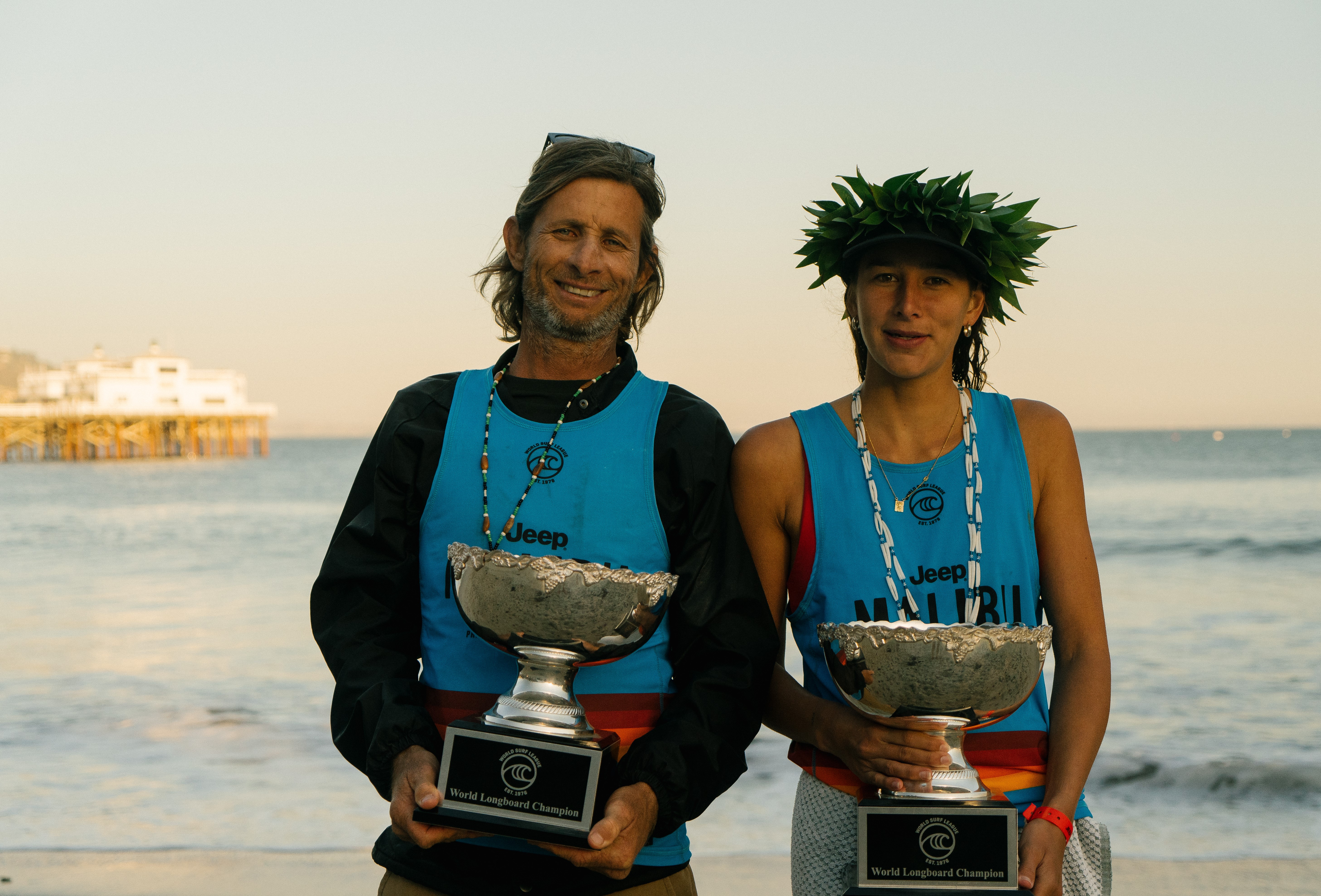 Blomfield, 22, became the youngest 3x WSL Longboard Champion in history with an impeccable year culminating with her finals performance today where she finished runner-up to Lemoigne. The Oahu, Hawaii, competitor had to overcome Longboard Tour veteran Lindsay Steinriede (USA) in a tight Quarterfinal bout to claim the Title with a solid 7.00 (out of a possible 10) and 13.00 (out of a possible 20) heat total. Blomfield was welcomed to shore by friends and family as they hoisted her up.

“I really didn’t expect this to happen, but I’m so grateful and thankful that it did,” expressed Blomfield. “It feels amazing to be the youngest, three-time World Longboard Champion. I didn’t really do that good in Noosa but I got fifth which is good considering and then I won the Surf Ranch. That’s when I realized I have a real shot at winning this Title.” 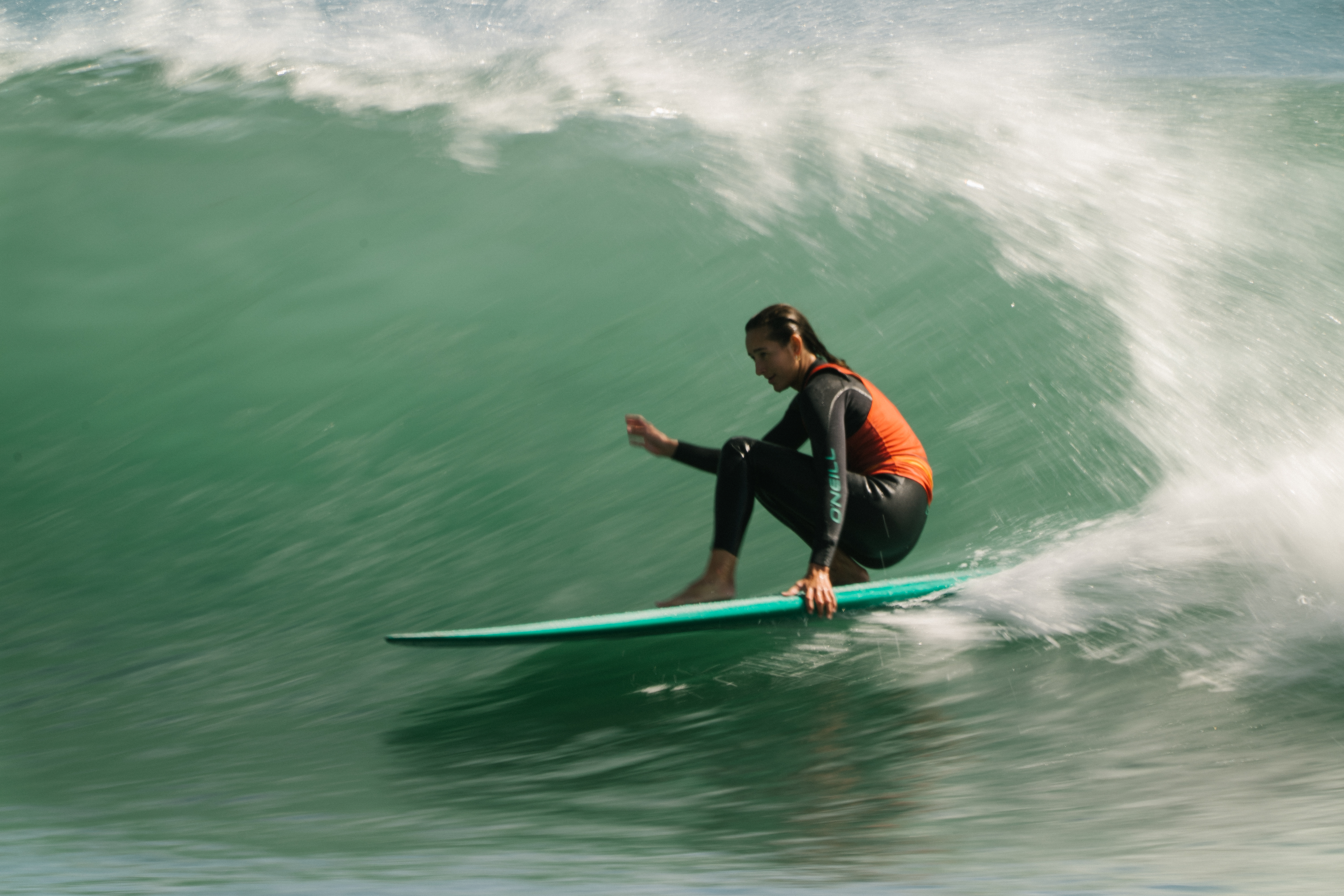 The work wasn’t done for Blomfield, however, as she then went on to showcase her calm under pressure and earn an excellent 8.83 over event threat Zoe Grospiron (FRA) after she dropped a 7.67 early in the Semifinals. Having secured her 3rd WSL Longboard World Title before having to surf the final, Blomfield would have to settle for a runner-up placing at this event as Longboard Tour veteran Lemoigne dominated the final with two excellent wave scores and impeccable wave selection to take her biggest ever career victory.

“I just love surfing and I’m super stoked my dad was here with me, he’s my good luck charm,“ added Blomfield. “It’s really extra special to be standing here with Joel (Tudor). I’ve looked up to him my whole life and I’m just so excited.”

The Oahu, Hawaii, competitor started the 2020 season off with an equal fifth in Noosa, Australia, before waiting over a year and a half to resume her ambitions for a third World Title. After her victory at the Cuervo Surf Ranch Classic, Blomfield entered Malibu No. 1 and maintained her composure throughout the event to emerge World Champion.

Over two decades since capturing his first Longboard World Title, the 45-year-old clinched his third World Title after making his return from hiatus in 2019 - earning him the title of eldest WSL World Title holder. Tudor had to muster his very best to power through a marathon day of world-class competition, matching up against 3x WSL Longboard Champion Taylor Jensen (USA) in Round 3, future World Title contender Kaniela Stewart (HAW) in the Quarterfinals, and a Semifinal clash with Longboard Tour veteran Tony Silvagni (USA) to earn his place at the top.

“I didn’t really have expectations of winning coming here,” admitted Tudor. “I just wanted to do well and finish. There were all sorts of elements that came to play. My dad hasn’t come here to watch me compete in 27 years, both he and my mom were here so I had an emotional second there. This was for Donald Takayama who mentored my whole existence, I wouldn’t be here where I am today without him.” 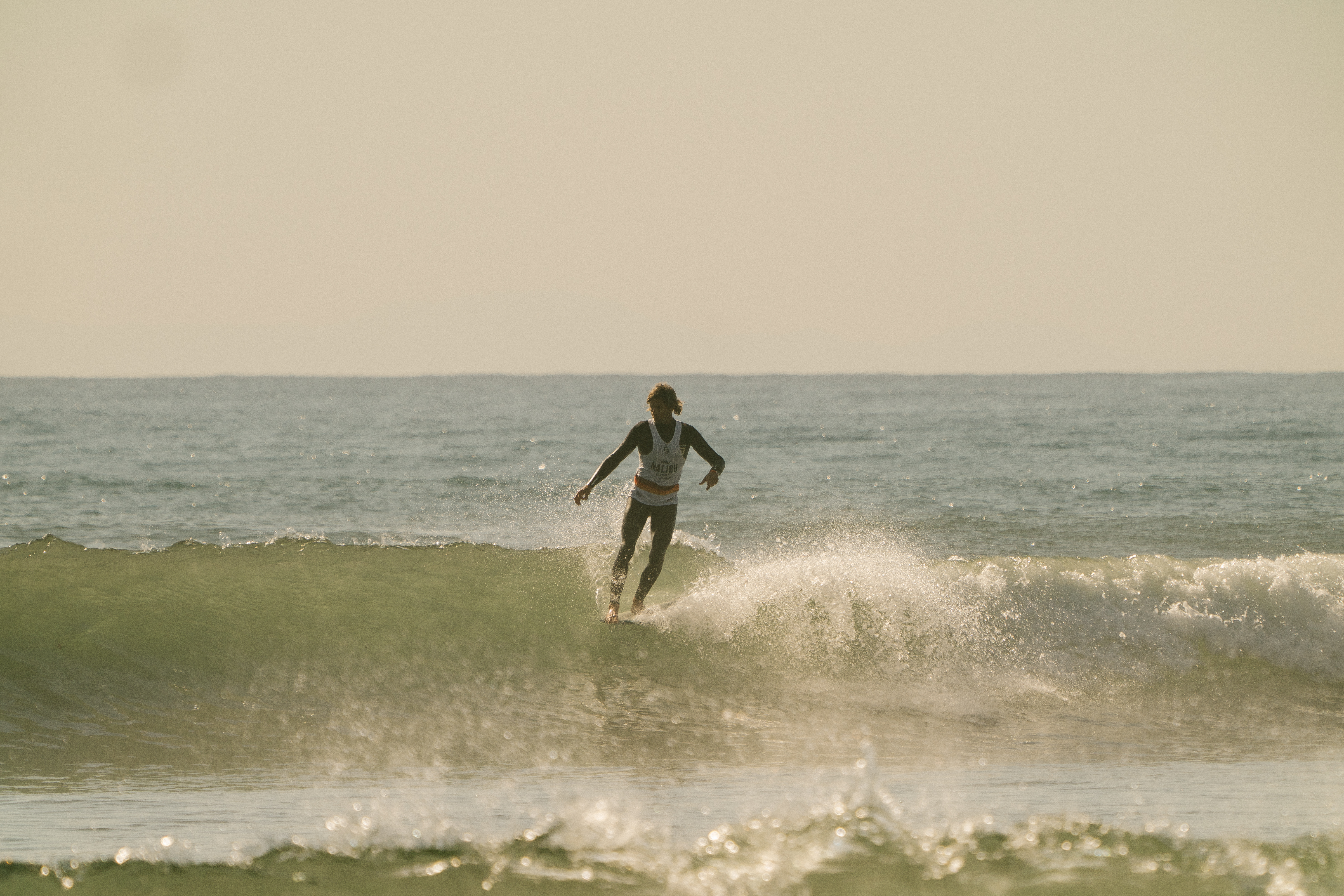 An incredible season started with a victory at the Noosa Longboard Classic before competitions were postponed due to the COVID-19 pandemic. Tudor’s equal fifth at the WSL Surf Ranch kept him at No. 3 heading into Malibu and capped off his immaculate season with one last victory.

“It’s cool to have your kids watch you,” Tudor added. “The last time I competed here neither Judah nor Tosh were born yet. When you’re a dad you don’t really talk about your accomplishments, especially prior to their existence. So it’s nice they actually got to see that and now I can say I finally beat Kelly (Slater) at something.” 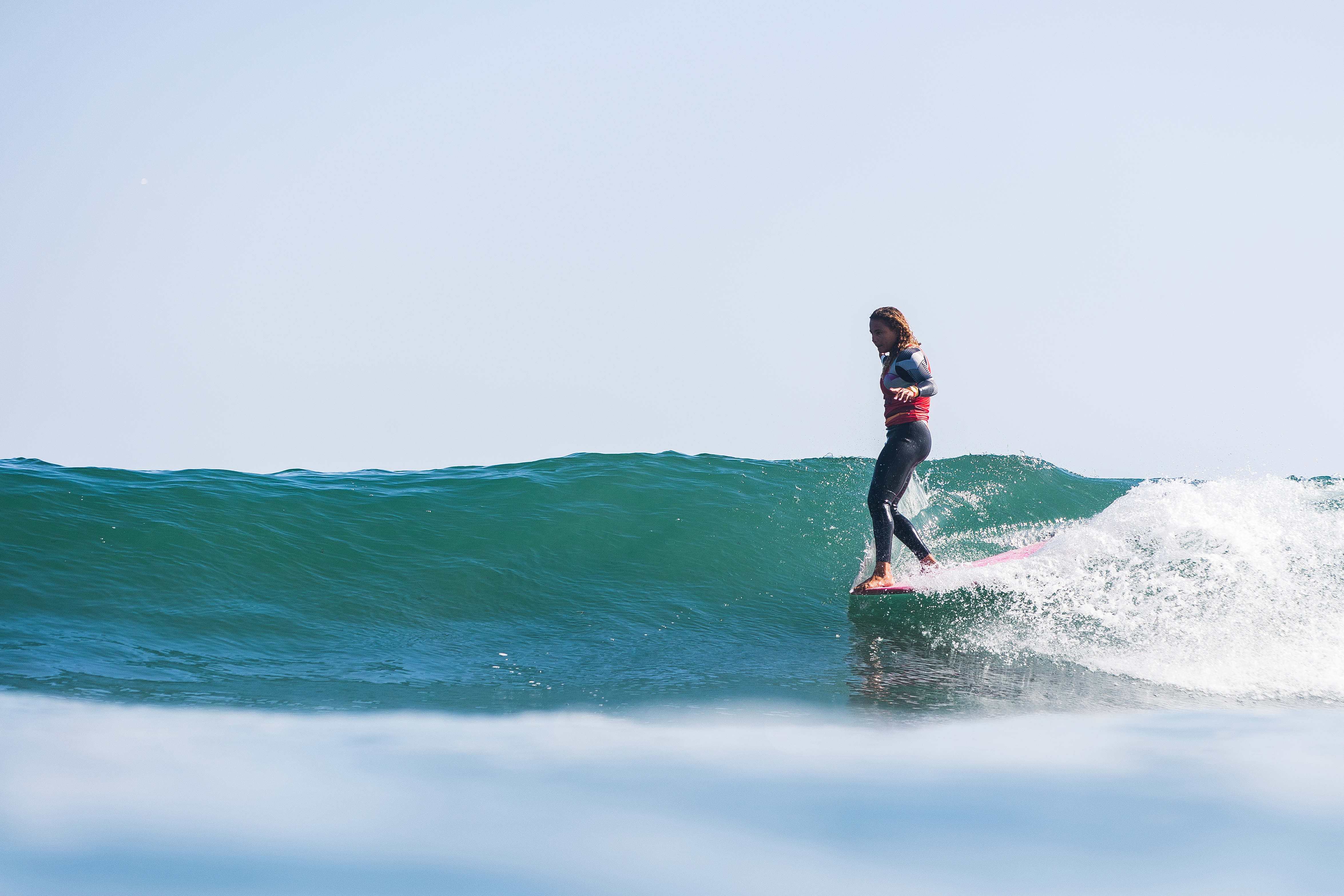 Pictured: Lemoigne was the only one who could end Blomfield's unstoppable form in Malibu. Credit: © WSL / Lodin

Reunion Island’s Lemoigne couldn’t be stopped on finals day, opening with an amazing 16.00 heat total over event threat Natsumi Taoka (JPN) in the Quarterfinals before taking down former World Title runner-up Chloe Calmon (BRA) by the narrowest of margins during their Semifinal dual. The 25-year-old saved her best for last, garnering an excellent 8.57 for her flawless style and footwork on the nose, to leave Blomfield needing a near-perfect 9.90 as time ran out.

“It’s a dream to win here at Malibu, it’s a perfect wave and I love it so much,” said Lemoigne. “It was slow so at the start so I waited for the bomb set waves and they came so I couldn’t be more stoked. I’m so happy to win and to share a Final with Hono (Blomfield) was really special. Congratulations to her and to all the other girls, and thanks to everyone here for supporting me and letting us surf this amazing place.” 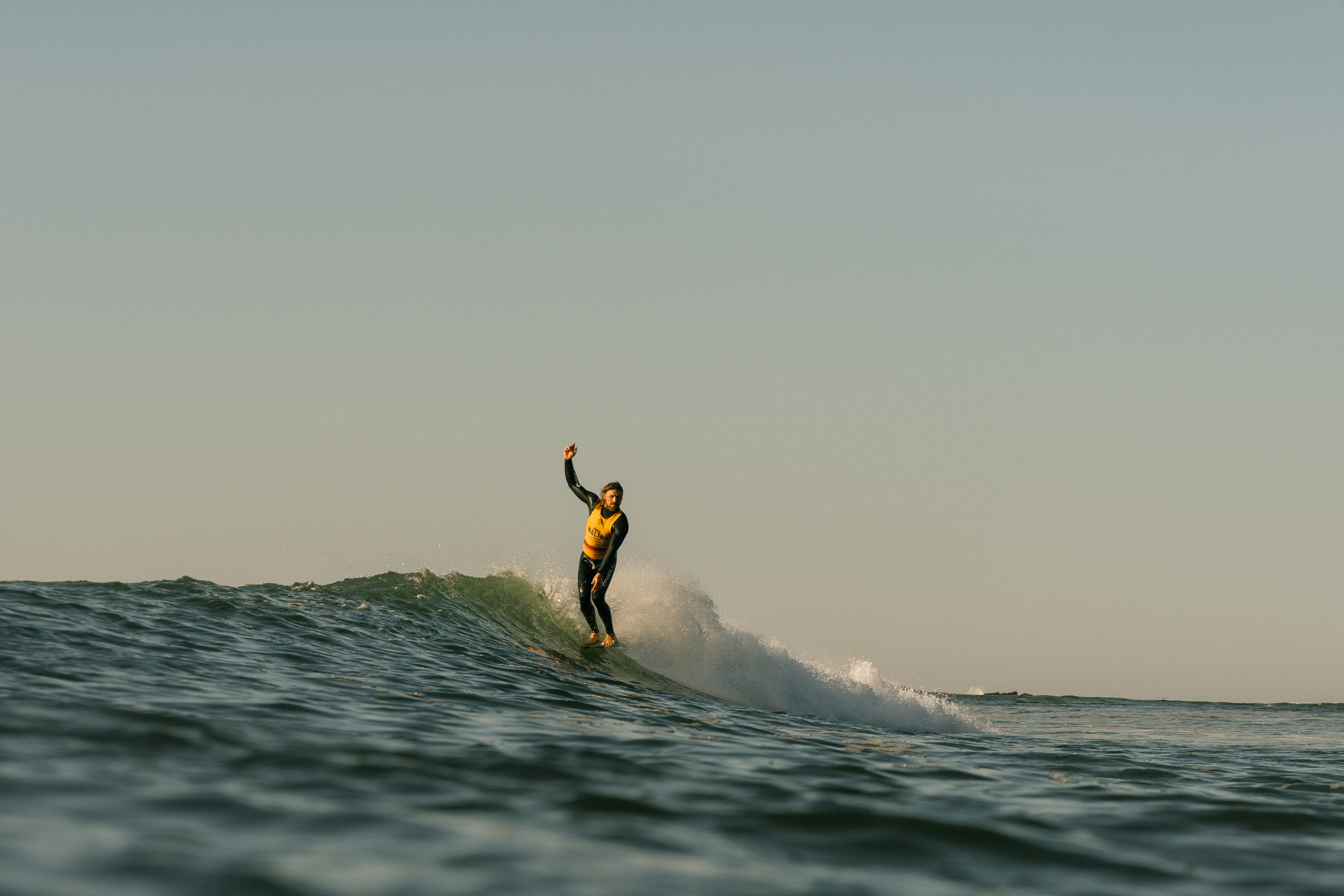 Pictured: Skinner earned his career-best result and with it, a spot onto the 2022 Longboard Tour. Credit: © WSL / Lodin

A dream run for Great Britain’s Skinner earned him a career-best runner-up result behind Tudor. The Longboard Tour veteran let his emotions take over following every heat win after learning he re-qualified to remain among the world’s best. Skinner overcame the odds starting with former WSL Longboard Champion Steven Sawyer (ZAF) in Round 3, fellow Tour veteran and Title contender Kai Sallas (HAW) in the Quarterfinals, and a Semifinal bout with the 2021 Title frontrunner Harrison Roach (AUS).

“What an event,” proclaimed Skinner. “Amazing waves the whole day, little slow in that Final but this man (Joel Tudor), the new champ, it’s just amazing. It was a pleasure to surf with him in that Final. I didn’t do well at the Ranch so I had to perform here and to do it at one of the most iconic waves in the world, it’s unbelievable. I’ve been doing this since I was 15-years-old and to finally make a Final, I’m beyond words.”