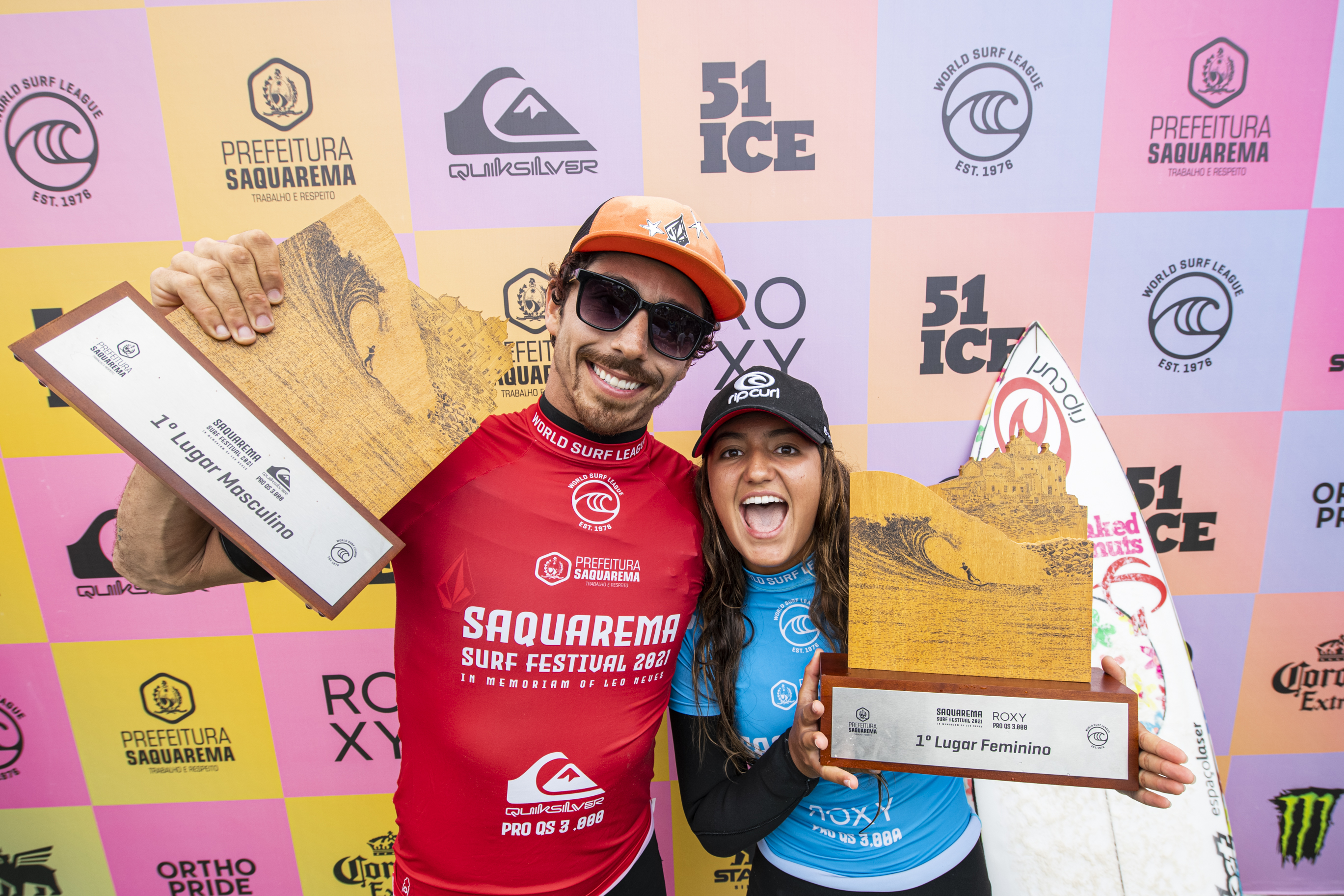 PRAIA DE ITAÚNA - Saquarema, Brazil (Sunday, November 21, 2021) - The Saquarema Surf Festival in Memory of Leo Neves and presented by the City of Saquarema ended in spectacular fashion on Sunday, culminating with an electrifying Finals Day in front of a packed audience at Praia de Itaúna, in Saquarema, Brazil. Yago Dora (BRA) was the standout surfer of the event, landing astonishing airs throughout the day and even earning a 10-point ride. Dora defeated local surfer João Chianca (BRA) in the Final of the Men’s QS3000 Quiksilver Pro, while Sophia Medina (BRA) took out her first victory at the Women’s QS300 Roxy Pro. In addition, Sol Aguirre (PER) and Cauã Costa (BRA) were crowned the 2021 WSL South America Pro Junior Champions.

Out of the ten highest scores of the event, six of them belonged to Dora, who surfed as if each heat was a movie part, excelling in the 3-to-4 foot waves at Praia de Itaúna and launching the biggest airs of the event, including the only 10-point ride of the contest and a 19.23 heat total during his Semifinal matchup against fellow Brazilian Alex Ribeiro (BRA).

Dora then had to face the other standout surfer of the event, hometown hero João Chianca (BRA), who used his local knowledge and support from the Saquarema faithful to make a bee-line directly to the Finals of the Quiksilver Pro. 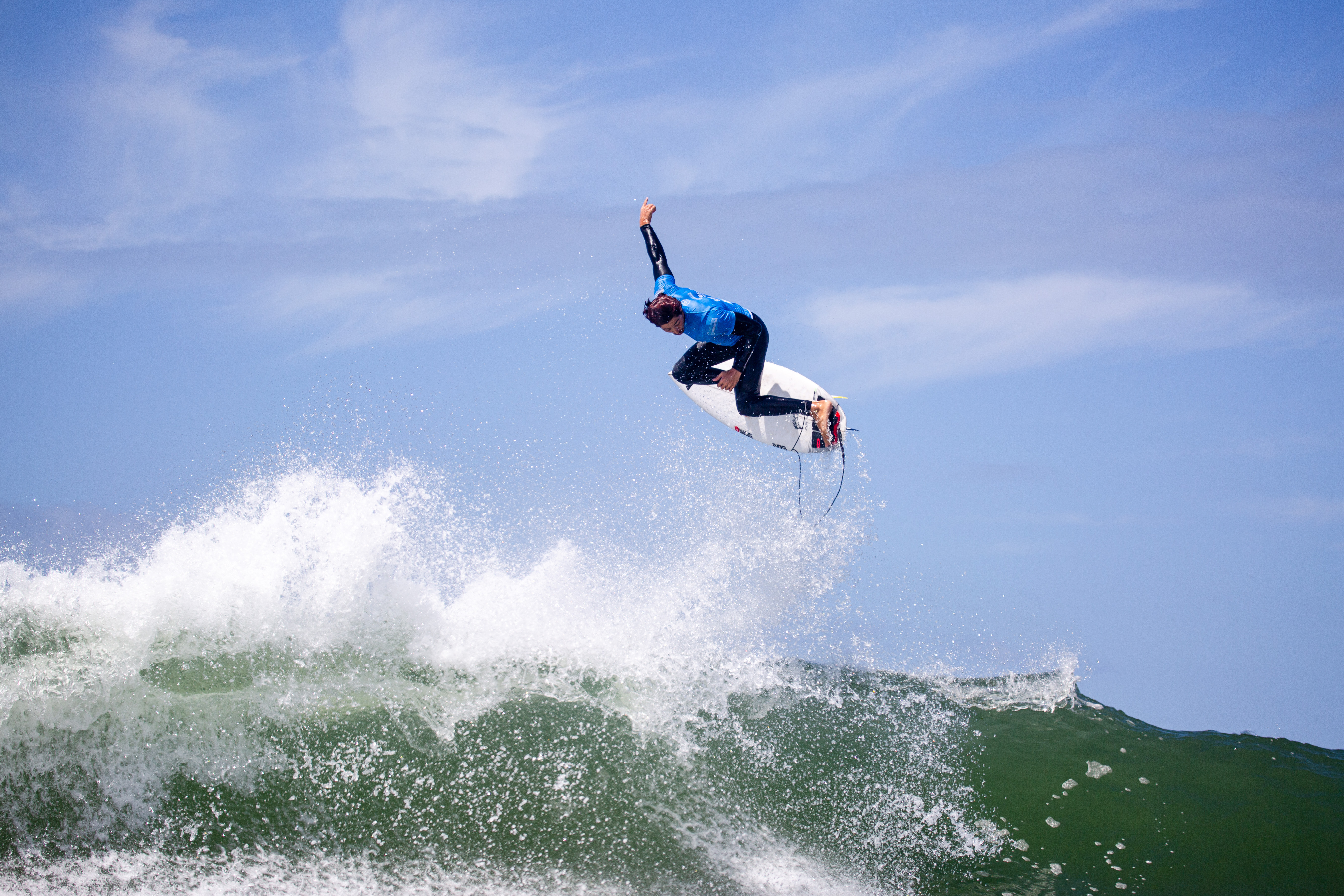 Chianca, who sits in 6th place on the WSL Challenger Series rankings, needed to postpone his flight to Hawaii after landing a spot on the final day of competition. Chianca’s mix of raw power and aerial flair has earned him respect and recognition in the surfing world, and used those characteristics in the Final against Dora.

Chianca seized a commanding lead over Dora by focusing on the righthanders at Praia de Itaúna, receiving an 8.83 and a 6.67 to leave Yago on the ropes. Dora, on the other hand, opted for the long, sloping lefts on the opposite peak, and after 15 minutes, Dora completed a huge full rotation air and was given an 8.67 by the judges. Yago then threw a towering, inverted air reverse which merited a 9.17. Dora added an additional 8.33 on two stylish layback maneuvers, which ended up not being averaged into his final score of 18.97 to Chianca’s 16.86 total.

“I’m really glad I won this event, but I was even happier to see that I kept evolving throughout each heat and increasing my scores and surfing better after each round,” said Dora. “I’m also relieved because I knew João was destroying the rights just from how loud the beach was screaming after each of his turns. But it was so cool being in the Final with him, we’re really close friends and when I come to train here, I always stay with him and we surf together all the time. I hope he can continue surfing great and guarantee a spot on the CT as well.”

Chianca, who was mentored by Leo Neves, was also ecstatic with his runner-up result in front of his hometown crowd at the event honoring Neves. 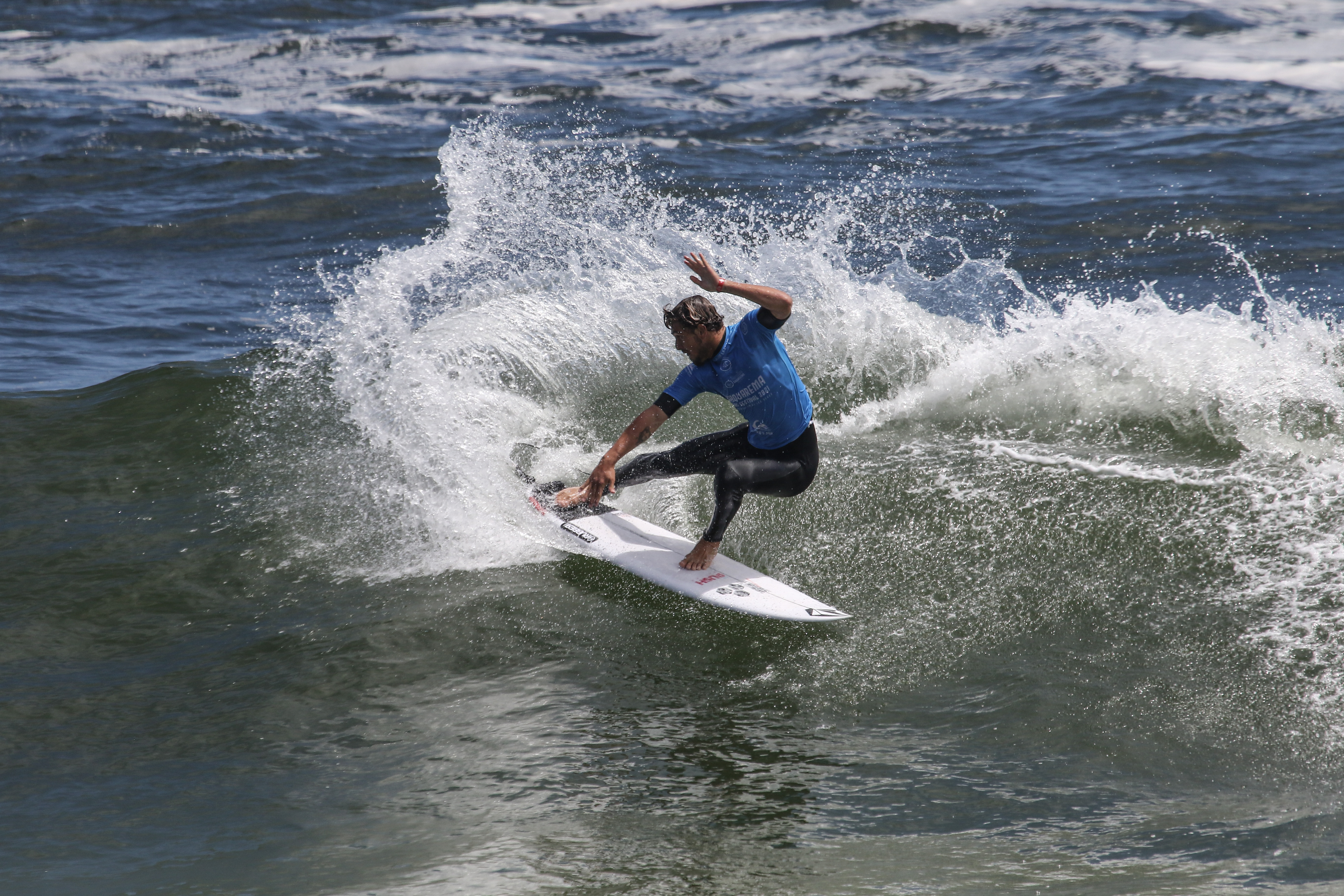 “I’m completely over the moon,” said Chianca. “Leo was the first pro surfer that looked at me and gave me attention when I was just a little grom. It’s any kid’s dream to have a professional surfer believe in you and it’s such an honor to become the surfer he always thought I’d become. I’m just so happy because what I most wanted was the chance to show my surfing in front of my friends and family, I did my best in each heat and surfing against Yago in the Final was a blast. I think he’s the surfer that the younger generation look to nowadays as an athlete and professional and he’s an example of how hard work and dedication can provide solid returns. But this whole event was blessed by Leo, so this one’s for him,” declared Chianca.

In the Women’s QS3000 Roxy Pro, Sophia Medina (BRA) earned her first WSL victory on the Qualifying Series after defeating Daniella Rosas (PER) in the Final by a score of 14.27 to 12.34 respectively. Medina’s name is now engraved alongside Dora’s on the Leo Neves Saquarema Surf Festival trophy, which will remain at the newly minted Leo Neves Surf Training Center, which was inaugurated yesterday by the City of Saquarema.

The 3-time WSL World Champion Gabriel Medina (BRA) won his first Qualifying Series event at the age of 15, his younger sister Sophia wasn’t far behind, earning her first WSL QS win at the age of 16. Medina competed in both the Roxy Pro QS3000 as well as the Pro Junior events at the Saquarema Surf Festival. Medina ended up losing to Sol Aguirre (PER) in the Pro Junior Semifinals, but was victorious over Rosas in the QS Final.

“I can’t believe I just won a QS3000,” exclaimed an emotional Medina during her post heat interview. “This has been one of my biggest dreams and goals, so I’m very happy right now. It was kind of humbling going from an amateur to a professional, it’s like a reality check. But I worked really hard to get here and I think that’s why I’m so emotional, because I know how much I had to put in and it makes me so happy to know that all that dedication was worth it,” declared Medina through tears after being chaired up the beach. 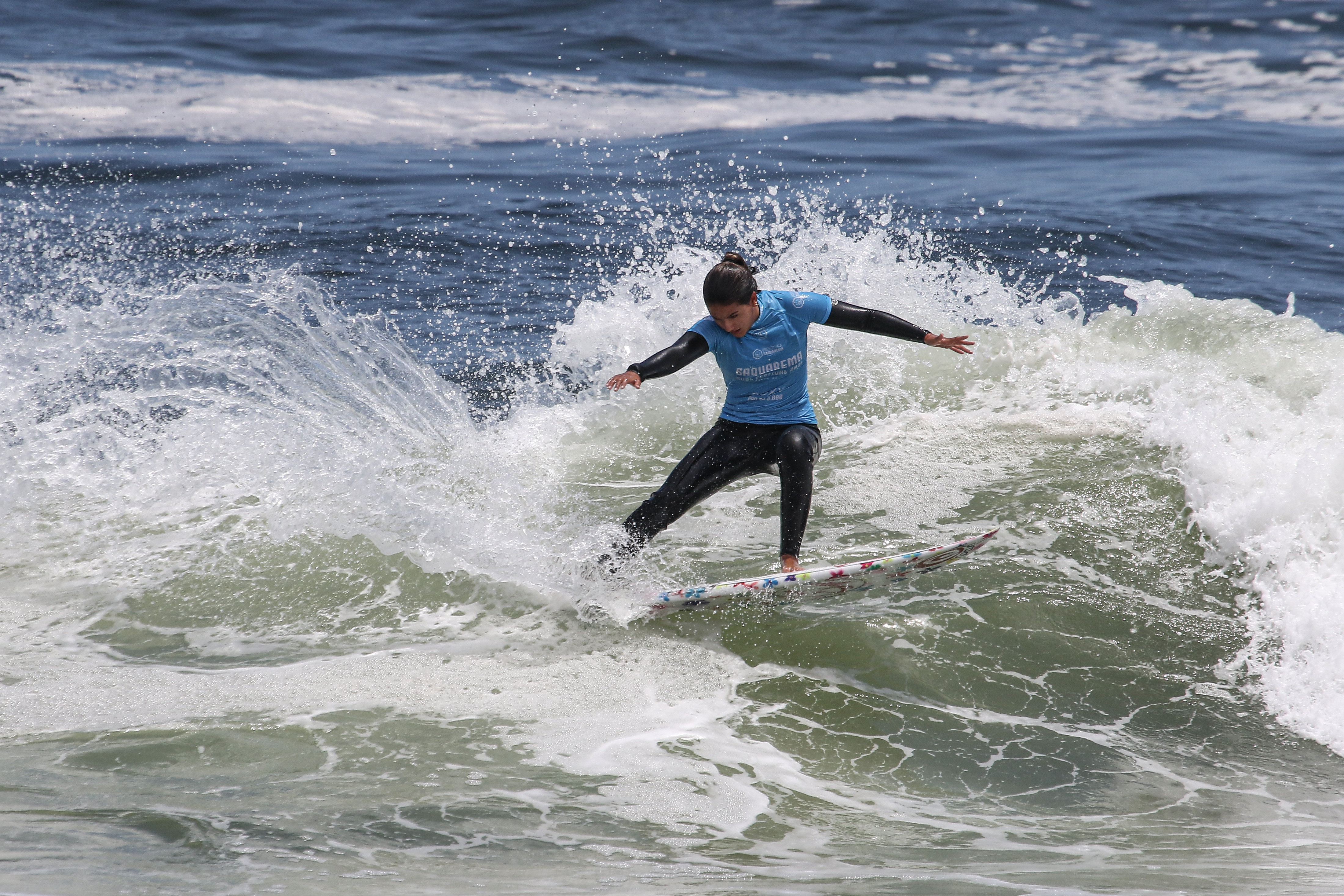 On Sunday, the 2021 WSL South America Regional Champions and Pro Junior Champions were also decided at the Saquarema Surf Festival. The Women’s Pro Junior Title was the first to be allotted with Sol Aguirre (PER) defeating 15-year-old Laura Raupp (BRA) in the Final by a score of 14.23 to 12.43. With her title-clinching victory today, Aguirre is now a 3-time WSL South America Pro Junior Champion, winning in 2017, 2018 and 2021.

“This is really unbelievable, the waves have been great and even though I didn’t start my heat off well, I knew that I needed to remain calm because more opportunities would come my way and I was able to surf well and come from behind,” said Aguirre. “I just believed in myself and in my strategy with a feeling that I knew I could win. It’s incredible that I’ve won the WSL South America Pro Junior Championship three times and this is something I’ll remember for the rest of my life.”

Costa and Kainalo both stuck to the righthanders at Praia de Itaúna and while Kainalo might be more versatile with his air-game, the jovial Costa displayed impeccable power surfing and explosive top-to-bottom turns to defeat Kainalo by a score of 17.43 to 12.63. The young man from the Northeastern part of Brazil has been a handful on both the Pro Junior and Qualifying Series divisions and solidified the best result of his career today at the Saquarema Surf Festival.

“It’s such a great feeling to win the WSL South America Pro Junior Title and it’s hard to describe all the emotions that I’m going through right now,” said Costa. “This is the result from a lot of hard work that I’ve been doing with my father. I train every single day and it just makes this victory even sweeter. This means a lot to me. I feel blessed and I hope to continue focused for the next competitions.”

The WSL South America Regional Titles were also handed out to day with Daniella Rosas (PER) winning her second regional title in the Women’s division and Wiggolly Dantas (BRA) earning his first title in the Men’s division. 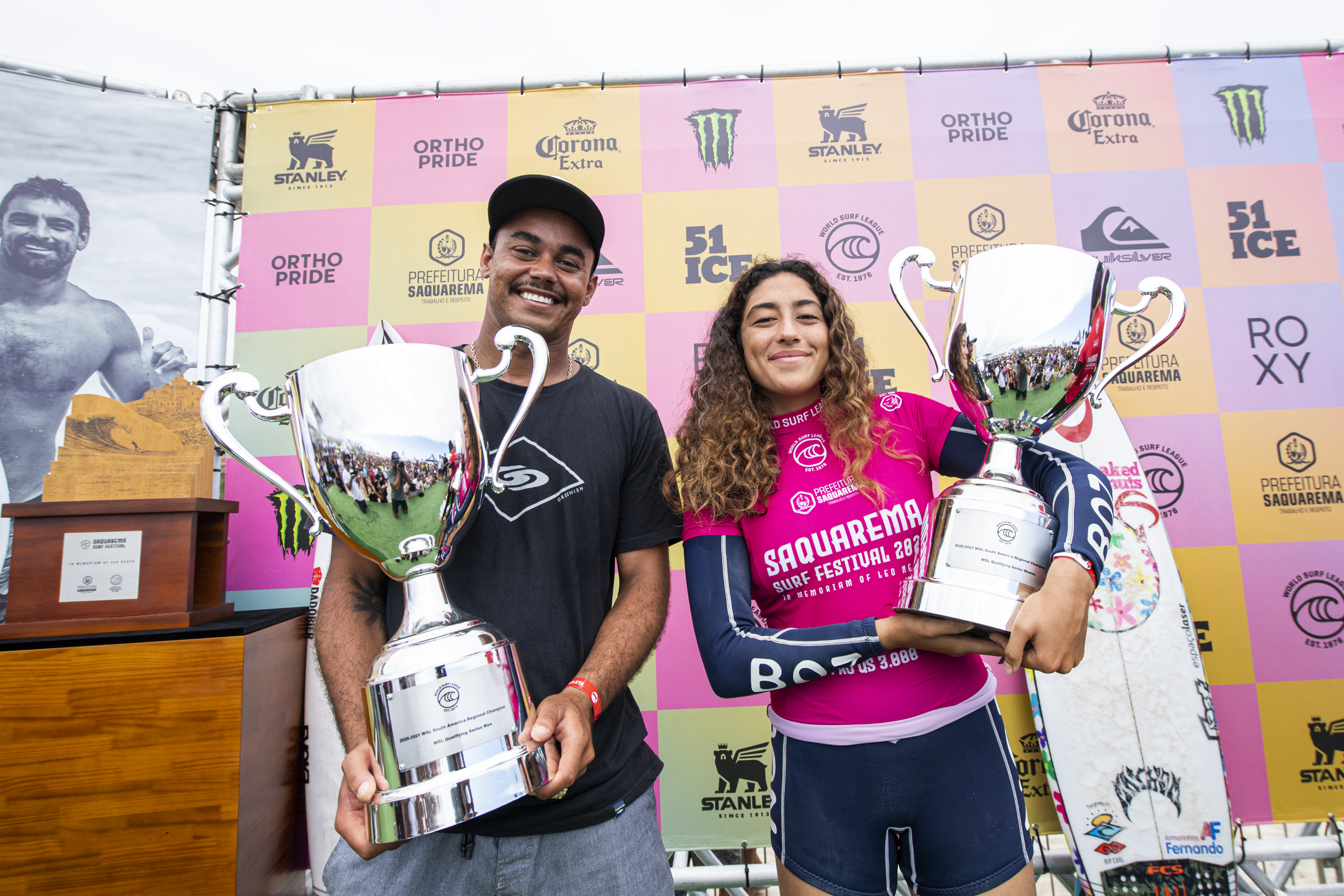 Right before the Finals took place, the 51 Ice Expression Session brought together the best competitors at the Saquarema Surf Festival to see who could bust out the most incredible maneuver during a 30-minute heat. In the Women’s division, Silvana Lima (BRA) took out the event with a sick air-reverse, while Samuel Pupo (BRA) won in the Men’s division with a tweaked-out air as well.

The Saquarema Surf Festival presented by the City of Saquarema is licensed by WSL Latin America for 213 Sports as part of the WSL Qualifying Series and South American regional qualifiers for the World Pro Junior and Longboard Men’s and Women’s categories at Praia de Itaúna. The event is sponsored by Quiksilver, ROXY, 51 ICE, Corona, and has the support of Orthopride, Stanley Brasil, Monster Energy and the Rio de Janeiro State Surfing Federation (FESERJ), the Saquarema Surf Association (ASS), MegAçaí and the Ricosurf and Waves websites. The event will be broadcast live on WorldSurfLeague.com.